I spend a lot of time outdoors pursuing adventures for work, education and experience or sometimes just the sheer thrill of it. Any opportunity to explore the world around us I jump upon. A few rules of travel I have created for myself are it must be physically challenging, mentally rewarding and cheap; yeah I am a tight ass when it comes to holidays!  So what happens when it all goes a little pear shaped? Below is an account of what happens when you let excitement override sanity and just decide “Stuff it why not, I mean how much harder can it get!” 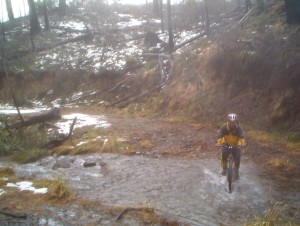 My mate Simon and I had decided to ride back from Falls Creek after a back country walk with friends in the Falls Creek area of Victoria’s Highlands. We had allowed ourselves five days to get to Melbourne, plenty of time to ride 400-500km for two young and fit lads.

We got out of the back country on the Tuesday evening. It was decided a night at Howmans gap would help us prepare for the road home. Scanning the Bogong High plains map a fire trail was found. It ran all the way to Mt Beauty from the Mc Kay creek power station, 15kms down hill nearly all off road. Sure it traversed for a few kilometers but we were skilled mountain bikers, and hey I’d been jumping my bike in 15 cm of powder just days earlier!

As we set off on the Wednesday morning, sprinkles of snow began to fall, incentive some may say, to take the road but where was the adventure in that! My Gloves were somewhere packed away as we started the descent. I came barreling into the McKay creek road with my heavily laden bike trailer pushing me headlong towards the gutter of the icy road. My hands already freezing, I had trouble executing an emergency stop. A sense the adventure was all about to unfold.

Soon we found our first turn off. We were off road. Yes we were ‘off road’. I yelled back to Simon to turn around. The track was already one foot under water and the bridge on the map, well  I am sure it was somewhere down the gully, albeit a bridge no more. A minor detour i thought, we’ll just go up and around the power station.

A few minutes later we were on our way again, below us an awesome white water creek could be seen and heard. Beyond that our crux emerged. This was the point at which we could have turned around, but that involved riding back up the hill, clearly the harder of the two at this point of the journey. So before us the trail disappeared into the grade two rapids for ten meters before emerging on the other side.

We sussed it out for a few minutes and decided how much harder could it get? With BOB trailers detached we waded across the knee deep water with bikes above our heads. The current was strong and every step had to be measured. The water was cold, after the second trip back and across for the trailers i had little feeling in my toes.

Yeah so it cant get any harder than that, we had a quick ascent of 100m vertical over the next five kilometers, then dropping trails all the way to Mt Beauty, damn this was going to be good.

As we traversed around the north east side of the mountain little patches of snow were sitting on the trail. How novel we thought and kept racing and pushing to hit them faster and harder. We forded a few small creeks and fell over in larger sections of snow drift. Hard work but we were having a ball. 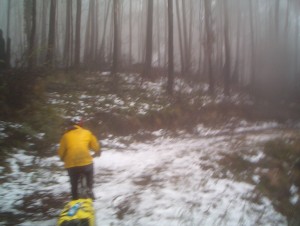 I came barreling into this section only to have my bike wedge into the snow and catapulted me skyward, as I lay there laughing, my bike was still upright. The next hour we rode, dismounted, pushed, and heaved and rode again just to fall off. Soon i realized the snow was deep and wasn’t quite as intermittently dispersed as it had been over the previous kilometer. Oh well we weren’t too far from that point where fire trails behave themselves, are devoid of snow and point downwards. 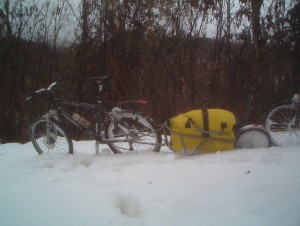 We got to A downhill section, but not THE one. I attempted to ride downhill with pretty hilarious consequence. “Shit this is getting kind of tough”, I thought to myself. We were clearly too far in to warrant turning around. With an optimistic glance of the map we agreed we couldn’t be too far from out of trouble.

As the snow on the trail approached the one metre mark we tried a few different techniques for making progress. At one stage we had the trailers off and would carry our bikes till exhausted then return for the trailers. This was even harder so we took it in turns to push wheel tracks into the snow. We could go about twenty meters out in front before collapsing in a heap, after doing this about ten to twenty times we would collapse on our trailers and let the time roll on. Then roles would be reversed when sympathy was felt. 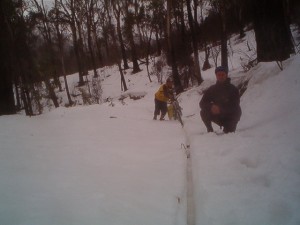 At one stage we’d been sitting there a while, i don’t really know how long, time was irrelevant. The whole experience, i felt kind of removed from, anyhow i noticed Simon gazing at the bank of snow in front of us.

“What are you looking at” i said.

“ab-sol-ute-ly-no-thing” Simon forced from his mouth.

We were drained, shot, exhausted, we knew we would get out of this situation but would it be before dark, before the morning, we just wanted out.

Five back breaking hours and only five kilometers later we reached the downhill but it was still too snowy to ride, I had a crack at riding but attempts were futile. A few hundred meters later the track rounded a bend and the snow subsided, the trail spread out before us, we were ecstatic.

As we pedaled off a few problems emerged, ice had formed in the cleats of our pedals. The wheels on our trailers were full disc’s of ice, maybe fully aero, but hardly needed. This combined with the fact we could feel nothing below our ankles made riding down a fire trail with fully loaded BoB trailers at up to 40 km/h pretty interesting, but hell what did we care we were making progress!

A few kilometers down the hill we entered a logging operation. It seems this whole area was destroyed by the 2003 fires and with nothing left they had taken the option of bull dozing everything. The track on the map had been over run by a bulldozer and scattered trees were all over the place. For us this was the last straw. We swore and cursed as we pulled our bikes over fallen tree trunks. Our echoes of unrepeatable curses could be heard down the valley.

Eventually after some pretty hairy riding, my trailer jack knifed throwing me off a few times, we arrived at the source of the logging operation. A rather big angry, yet some what confused logging man came walking quickly towards me. I sensed his concern and frustrations so I greeted him with “Help, get me the hell out of here!”

He seemed somewhat confused as to how we had got there. When we told him a brief explanation of how we happened upon the operation. He told us they had not bothered to close the operation off with signs from the top end coz no one would think to come down that way at this time of the year. Well think again buddy, if there are challenges to be had people will do them!

As I stood there staring at this man I thought. “Only wish I knew what I do now at the top of the hill”

I think we both felt and looked pretty stupid to the logging guys so as soon as directions were given we were out of there off down the hill.

The next twenty minutes rolling into Mt Beauty were pure bliss. We were going so fast our clothes were drying out and our toes could be felt again, yeah and we were reminded as to why we do this.

We sat out the front of the supermarket for almost an hour returning in for more munchies every few minutes. When we had stuffed or faces enough to realize who we were and what we were doing we grabbed a six pack of South Australia’s finest (which for some reason was cheaper than in Adelaide) and made for the caravan park. We lashed out and hired a Yurt (Mongolian home) kind of fitting i thought after our days epic. We hung our stinky wet clothes all over the place ordered pizza and the fatty goodness of deep fried fish, drank beer talked shit and reflected on what was one of those epic days, hell at the time but a laugh to look back upon.

Over the next few days we crossed about six mountain passes and took an easier route to Melbourne, short of going straight down the Hume Highway. We met a scary but friendly drunk in Alexandra, drank far too much Guinness to comfortably ride much further one night and laughed a lot about the events that unfolded on the first day!