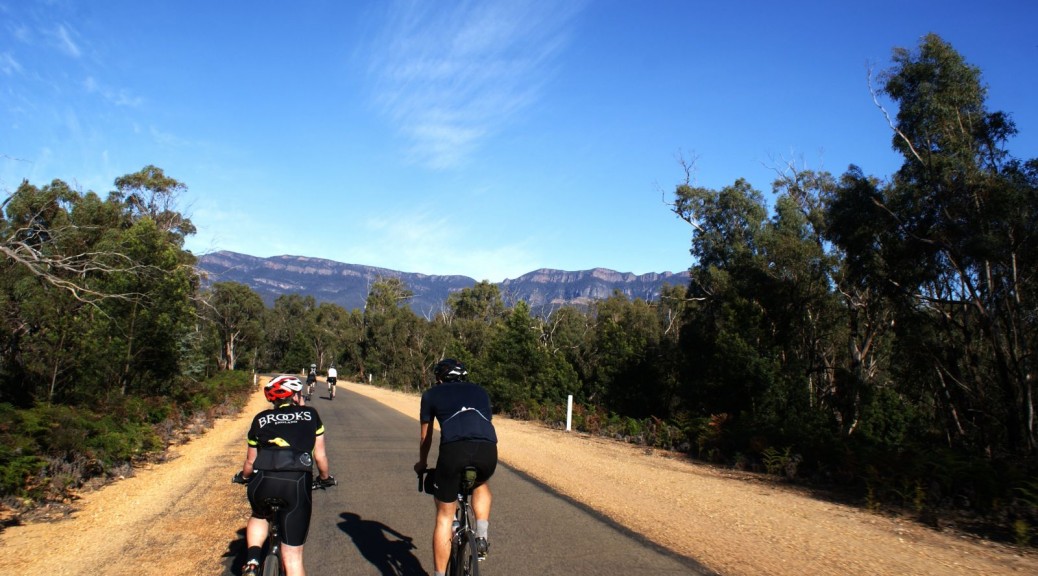 The Grampians have enthralled me since I was a kid when I would peer out of my parents car window  on frequent road trips between Adelaide and Melbourne along the western highway. I often wondered what magic those mountains held! Fast forward to the late 90’s and I began to explore it for myself! Fifteen years ago I spent a few awesome long weekends exploring fire trails and single track in the mazes of ancient rock! Ever since I’ve been hooked on micro adventures into the region as it makes a great long weekend from Adelaide or Melbourne!

When I started pushing longer distances on day rides with friends in Melbourne I came to the realization that those long weekends could be compressed into one very big day. From Ararat dirt roads lead all the way to the Grampians. This is how the Dirty Rat came to be.

On the first Dirty rat in 2013 ten of us caught the Friday night train out to Ararat devoured pizza and tried to get a good nights sleep crammed into the cabins of the salubrious acacia caravan park.

We rolled out of Ararat at dawn on some magical country roads. As the morning unfolded the Grampians came into view and the looming presence of Mt William greeted us. The few hours through to Jimmy creek campground passed without incident and were easy enough to lull us all into a false sense of security. We had a quick break there before heading up the main road and over a short but steep climb on Serra road. The backside of Serra road descends steeply pitching you headlong into the Glenelg river basin, the trail is rocky and claimed its first victim (just a bicycle tube). Morning tea was decided upon whilst the repairs took place. Detouring off down the Beehive track was awesome as this overgrown trail forced us to pick the best of the double track ruts.

We were making good ground by late morning and the tempo remained high as we set a steady rhythm along Syphon road and skirted the edge of the Victoria range. I had hoped to traverse the Victoria range but it was closed due to recent fire.  I hindsight this was a blessing as it would have lead to a 16+ hour ride! After the blissful morning shit was about to get real! The next few kilometers were spent in the hot midday sun clambering up an unrideable fire trail on the way to Wallaby rocks.

There were a few tears and plenty of cramps as we climbed and all slowly ran out of water in the hot sun. A small waterfall was found to replenish our dwinding water supply. We made the summit after the hard slog and we were greeted with some fantastic views!

The mornings momentum had been quietly crushed by the brutal climb and the subsequent rocky descent, we all limped into the carpark at McKenzie falls and the joy of ice cream and soft drinks lifted our spirits! (N.B The MacKenzie Falls kiosk has not reopened after the 2014 bushfires) A contingency had to be arranged as we were still a long way from home and the intended route was no longer an option this late in the day. We made tracks across the tops of the central range and dropped into the valleys near the shore of Lake Bellfield. From the Valley a pinch climb up through Redman gap got us back over the Mt William range and back out along the rolling hills to Ararat. By this stage at kilometer 160 I think everyone was hoping for some smaller gears! Over the backside disaster struck! Scott came into a corner way too hot on some pebbly gravel and skidded left to right before high siding himself onto an embankment at a fair rate of speed. How he didn’t break a collar bone I will never know. The impact broke his helmet and gave him a mild concussion. We were still 45 km from home and it was getting late. The roads were pretty easy beyond there but it took a lot of coaxing to keep Scott moving. We Got back to town just as the sun was setting on what was a truly magnificent day. We had managed to stick together covering 200km in 13 hours on some very challenging terrain. That night we cooked up a massive BBQ, cracked open some beers and reflected on a very special day.